Cairo to California is published here!

At long last, the publication of the first public draft of my book

From Cairo to California: A Concise History of Bellydance in Egypt and America

Cairo to California includes stories of the important personages and periods of bellydance evolution from its birthplace in North Africa to its innovations in North America. It is comprehensive but concise, written in an easily accessible language, and thoroughly researched by a cultural anthropologist. It includes a bibliography and glossary of terms. If you are a student of anthropology, dance, women’s history, or world culture studies you will find it a valuable resource for your personal or classroom use.

This draft is sort of a bare-bones publication, with minimal design and few photos or graphics. I hope to include these later and publish again on a separate website. I have embedded YouTube links to pertinent examples throughout the text or you can access the whole playlist here.

I am happy to share this version with everyone for free but please respect the work I put into it by not misappropriating any portions of the book. If you have comments or clarifications—especially regarding historical facts—please send me an email at cairotocalifornia@yahoo.com.

This past weekend (October 5-6, 2013), Linda Holiday Sensei, chief instructor of Aikido of Santa Cruz celebrated the release of her book, Journey to the Heart of Aikido: The Teachings of Motomichi Anno Sensei. It chronicles her spiritual journey with Anno Sensei, eight-dan and master instructor of aikido. In honor of the launch of the book, many featured characters in her personal history—including Anno Sensei, and Senseis Mary Heiny, Robert Frager, Jack Wada—attended and spoke at a public reading and conducted special master classes.

Let me step back for a moment to explain how all these relationships began and why they are significant in the publication of this book.

It begins in 1969 when Robert Frager began teaching aikido at the Mission Hill High School in Santa Cruz. Both Jack Wada and Glen Kimoto began their training there. In 1970, Frager began teaching aikido at UCSC and invited Frank Doran to join him. Linda began her practice while a student at UCSC in 1971 and by 1973 had moved to Japan with classmate Jack Revoir to deepen their understanding of the art. While in Japan she met Mary Heiny who introduced her to O-Sensei’s student, Michio Hikitsuchi Sensei. Heiny Sensei took over instruction at UCSC in 1974, passed the position on to Jack Wada who tricked Linda Holiday into taking over the class by saying he was taking a short leave of absence. In 1982, Linda and others moved off campus to open an independent dojo, North Bay Aikido.

Linda first met Anno Sensei at Hikitsuchi Sensei’s Kumano Juku Dojo in Shingu, Japan in 1973 where Anno was a senior instructor. Linda, a tall, young, California blond, became enamored of Anno Sensei’s emphasis on the founder’s spiritual teachings regarding “kokoro”—heart. She writes of him: “With [Anno Sensei’s] appearance at the door of the dojo, I would feel a strong current of energy enter the room, as if lights in the high ceiling of the dojo had suddenly become brighter.”

As many of you know, I conducted my doctoral fieldwork at what was then called North Bay Aikido. During the first year of my training at North Bay, the dojo moved from its charming but too-small space on Washington Street (now Kali Ray yoga) into its permanent 5,000-square-foot location on the corner of Chestnut and Mission. The move marked the end of an era in the history of aikido in Santa Cruz, the period of its early development (1969-1996) and the beginning of a new period of spiritual growth. In 1999, the year I concluded my research, Linda Sensei invited her mentor, Anno Sensei, to visit the dojo.

Here’s what I wrote about that event in my dissertation:

“Since the conclusion of my field research, the dojo membership has changed: blue belts are now brown belts, brown are now black, shodan are nidan; students have moved away, married, had babies; Linda returned to Japan after a 20 year absence. And perhaps most significantly, North Bay Aikido hosted the visit of one of its Japanese spiritual “grandfathers,” Motomichi Anno Sensei. I have tried a number of terms to express what happened at North Bay during his 1999 visit: crystallization, turning point, reciprocity of spirit. “Consolidation” is the word Jan used; Jerilyn said it was the culmination of twenty years of work and vision; as if everything previous was in preparation for Anno Sensei’s visit. Linda too felt that something had changed. All the members of North Bay are trying to describe the fullness of the community’s experience over the three weeks of his visit. The way he captured our hearts, and we his. The way his spiritual teachings of aikido answered North Bay’s new building and status: a big spirit for a big future. Anno Sensei instructed us to make our movements big and expansive so that our spirits would be big and expansive. “Train your spirit,” he said repeatedly, “not your technique.” His big spirit and generosity humbled us. (Forgive me if I speak so personally, using “we” and “us” instead of “they” and “them.” But this fieldwork was personal and its difficult to go on speaking of the members of North Bay as if they were distant “others,” especially in regards to this event)

The visit of Anno Sensei to North Bay Aikido dojo and its annual summer retreat at UCSC will have long lasting repercussions on aikido in this region. Our collective feelings for him were displayed at the retreat banquet when we rose and gave him a sincere standing ovation and again at the end of the retreat when many tears could be seen in the eyes of participants who had to say good-by to him. I said to Linda later that day as I cleaned out the sensei dorm rooms that I was glad he would be teaching more classes at North Bay because I wasn’t ready to let him go yet. “I don’t think he is ready to let us go either,” she replied. Linda knew it would be an exceptional event but as she said to me, there was no way she could convey it to us; we had to be in his presence. Anno Sensei’s visit came at the end of my fieldwork. It was both the apex of an era for aikido in Santa Cruz and the beginning of another.”

Anno Sensei, in fact, has visited Santa Cruz nearly every year since that inaugural event. Linda and other dojo members frequently visit Anno Sensei at his dojo in Shingu, Japan. They just couldn’t let go, and have instead created a unique and profound bond between these far-distant dojos. In the years since 1999, Linda Holiday began recording her conversations with Anno Sensei about the heart of aikido and translating them into English. The result is a record of Linda’s path into aikido, both historically and spiritually, and—perhaps more importantly—the life history and spiritual teachings of one of aikido’s most precious resources, Motomichi Anno Sensei. 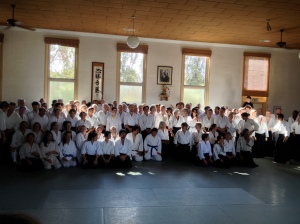 The launch of Journey to the Heart of Aikido

Four generations of aikidoka were represented in the audience of the public launch and celebration, and lineage was a key topic of the speakers. Founder Morihei Ueshiba O-Sensei is, of course, the generational pater who died in 1969, only four years before Linda Holiday began to train in Japan. But as a direct and close student of the founder, Motomichi Anno Sensei represents a unique generation of aikidoka. Mary Heiny, Robert Frager, Richard Strozzi-Heckler, and John Stevens are among the third generation and were among America’s first practitioners; Linda Holiday, Jack Wada, Glen Kimoto et al represents only the fourth generation, and Linda’s son, Nathan, already a black belt, represents the fifth. Their presence—from Anno Sensei to Nathan Holiday—created a strong sense of lineage connecting directly back to the founder. Each of these practitioners are committed to transmitting O-Sensei’s spiritual teachings as well as his techniques. This is not only an intellectual process but a kinesthetic and tactile one, as Frager Sensei commented. This quote from Frank Dobson explains aikido’s somato-spiritual connection nicely:

“What is much more important than anything I say is that I touch you. Through me, through my touch, comes the touch of the founder of Aikido. There is no Bible you can buy that says, ‘This is what Aikido is.’ It is transferred from person to person. These vibrations pass among us.”

And so, after an evening of selected readings from the book, comments and stories about training in aikido in those early years, and demonstrations by children, young adults, and senior practitioners, the celebrants returned to the mat on Sunday morning for a long day of training. I stopped by to watch for a while. Many of the same people who I was training with back in 1999 are still out there (though, they are grayer, balder, and have a harder time getting up from seiza). But the spirit moved everyone and carried on even into Tuesday nights regular evening class taught this time by Anno Sensei. From what I am told, the closing circle was quite emotional and prolonged…because no one was ready to let go again. That ineffable event that Linda predicted in 1999 has evolved into a bond so strong that hearts have been forever changed.